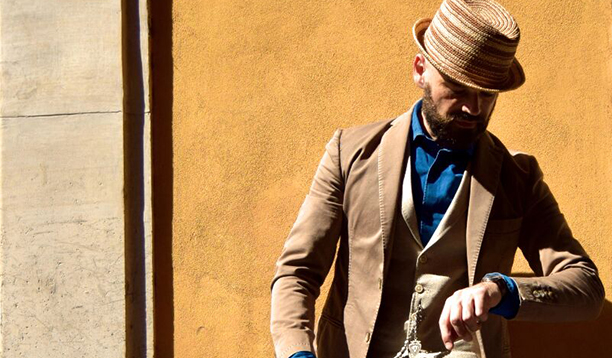 If the word “dandy” has some sort of positive acceptation in your mind, you are sadly mistaken. The sub-culture of “dandyism” originated during the last decade of the 18th century, in the turbulent streets of London and Paris. The etymology of the word “dandy” itself is unclear. Maybe it is a contraction of “Jack-a-dandy” which means “conceited fellow” and perhaps “Dandy” might have something to do with the name Andrew, too.

Yet, according to the Merriam-Webster, a dandy would be “a man who gives exaggerated attention to personal appearance”. Some claim that the first dandies were parvenus. They were trying to imitate noblemen but, lacking the taste, they never really got it right. Understatement was not their forte. In an effort to appear more sophisticated than they were, they regularly crossed the mark with their outfits.

Even the literary dandy, although well represented, has rarely been described in a positive light. Prevost, Meredith, Carlyle, Balzac and also Baudelaire have all written about some sort of dandyish hero, at times romantic, occasionally cynic, and in other instances superficial and self-absorbed.

So, in the real modern acceptation of the term, the dandy is always, indeed, obsessed with his clothes and sometimes even a tad too effeminate. Pitti Uomo would be a good place to start looking for dandies.

It doesn’t sound like a good place to start. Yet, “nothing stems out of diamonds, but flowers do stem out of manure”, a well-known Italian folk-singer used to sing. In fact, all you need to do to turn a dandy into a wonderfully dressed man is take some elements out. Look back in order to go forward and behold: the New Dandy is in front of you. We are dealing with a man who is well aware of his cultural and social background but does not actually care about it. The New Dandy is someone who does like clothes but is not obsessed with them. Somebody who cares about being well-dressed, but isn’t preoccupied with his appearance.

To put it short: the New Dandy is the ideal archetype of the modern gentleman, or - if you wish - the best possible synthesis between the classically dressed businessman and the flamboyant dandy of times past.

Keep it simple, but make a bold statement with colours. Take into account your body type and facial complexion, consider the weather and the venue and don’t forget to dress accordingly to the day of the week and the time of day. Use details sparingly, ergo: Don’t exaggerate with peacocking elements. Go for pastel colours and subtle contrasts during “the happy summer days” - to put it a-la Lewis Carroll -, but be ready to tune down the colours during the night and go for bolder, more neutral hues in wintertime, when the sun is hidden behind the clouds. Keep one thing in mind, however: the ideal setting of every respectable New Dandy would be a cosmopolitan city during the weekend, regardless of the time of day. A New Dandy, in fact, always finds himself at ease downtown, nonchalantly strolling around. His favourite activities appear to be window shopping, people spotting and attending informal social events.

This “New Dandy” style I am talking about has basically been invented by the Italian brand Paul Taylor. I recently paid a visit to their Roman flagship store and was warmly welcomed. Me and Marco, the kind and impeccable store manager, have put together two different outfits to give you an idea of what a New Dandy could look like. 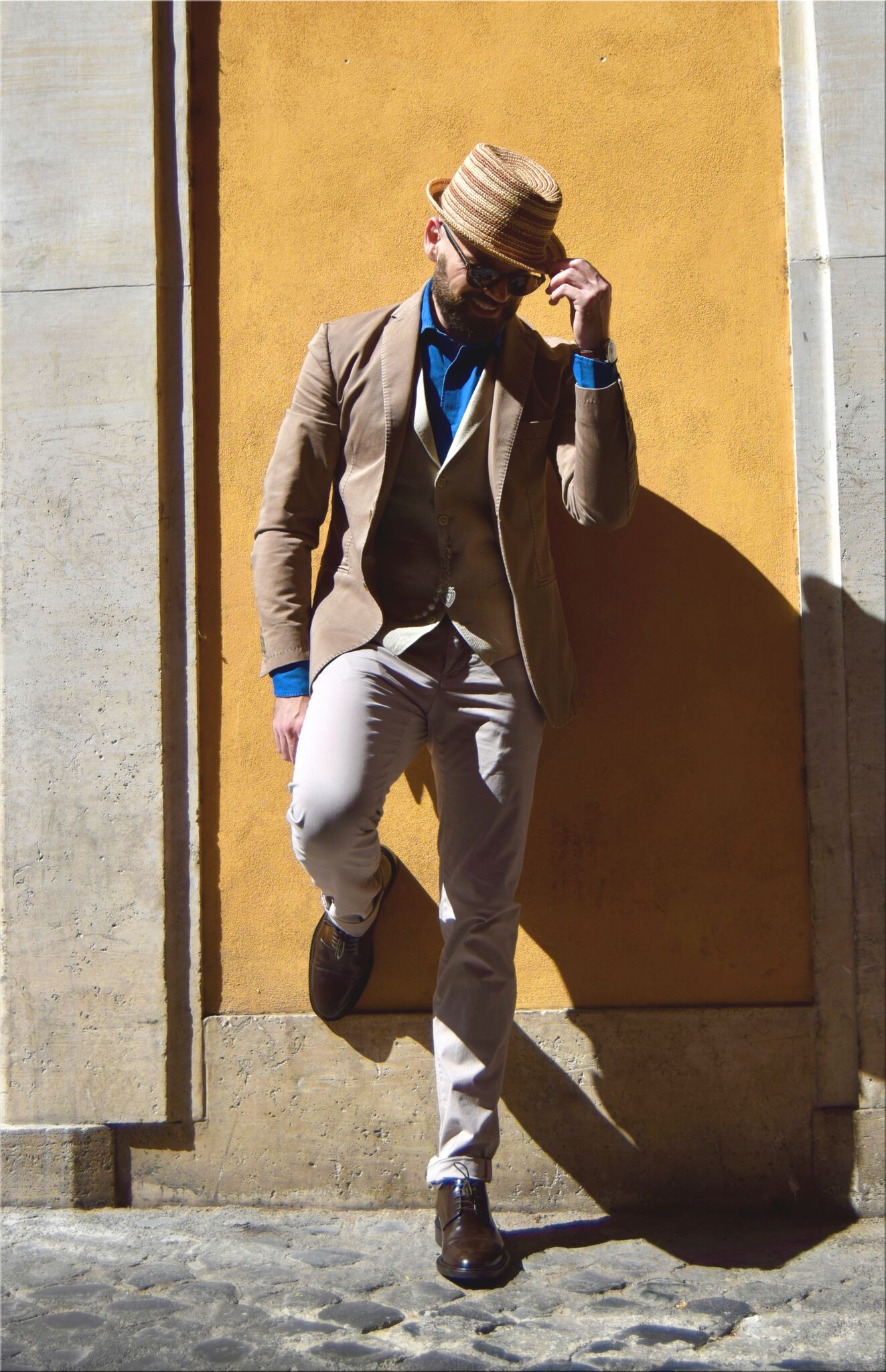 The two-buttons, notch lapels cotton jacket in Sand Dune brown with jet pockets and semi-structured shoulders is the ideal companion of the New Dandy in his urban leisure endeavours. Notice there is no pocket square and no boutonniere. That would have been a must for the old-fashioned dandy, but it is too much for our modern day hero.

“Too old to be new and too new to be classic” is Paul Taylor’s company motto, indeed, and I like it. In this case, the classic is represented by this vest made of cotton and linen, the colour of concrete. Notice the twill weave and the beaded chain with a shield pendant. Suggestion: get yourself an old pocket-watch to use it as an additional, yet subtle, peacocking element. Anyways, you don’t really need to wear a watch during the weekend.

I love this mariner blue denim shirt, to the point that I have actually bought it for myself. I think it looks fantastic under that jacket - the colour scheme we went for being almost complementary. By the way, the denim shirt gives this outfit a contemporary taste. Yet the solid, traditional colour, keeps it in the realm of pragmatism. An old dandy would have probably gone for a much more flamboyant shirt and thus we have avoided that sort of drift.

The five-pockets trousers’ fit is slim, but not exaggerate. In this case, the colour is “London hue”. They are comfortable, but not too “relaxed”.

The beautiful, cap toe derbies in seal brown are obviously made in leather, no rubber sole!

As per the details, look at this magnificent straw hat with horizontal stripes: it represents some sort of mix between a derby and a porkpie, therefore it must be taken into consideration solely for casual events. It definitively makes this outfit pop out.

In case you were wondering, the wristwatch is a Paketa “Big zero”, nothing expensive, but - thanks to the acronym “CCCP” stamped on its original strap - it’s the ultimate conversational piece. Oh, and it’s noisy as a communist hammer, but also extremely reliable, like the anvil upon which the hammer strikes.

Finally, the Miltzen, tortoise sunglasses are a pair of Maui&Sons. 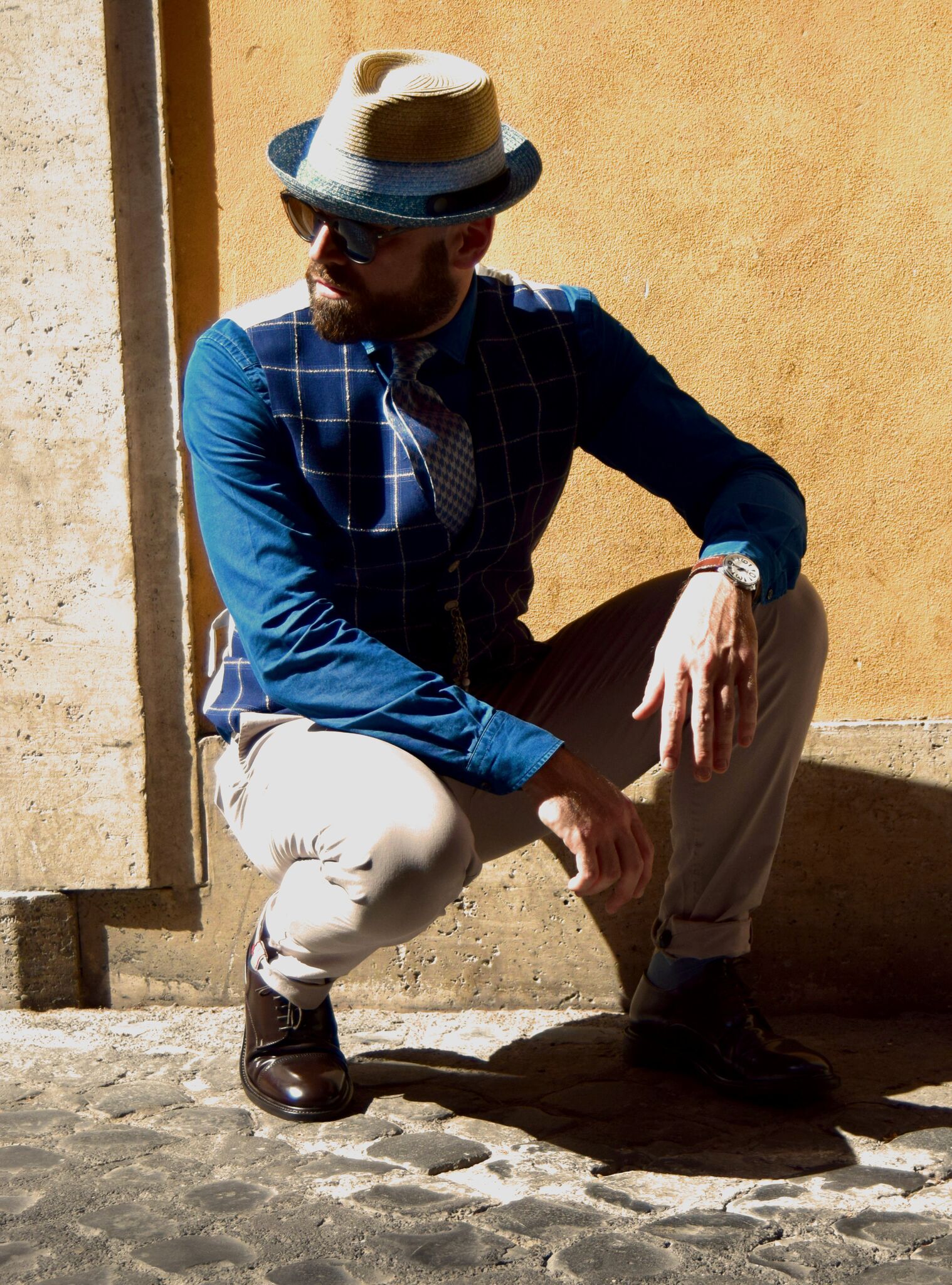 What do you do when the sun shines and the living is easy? Simple as pie: you get rid of the jacket and change your vest. Now, the vest becomes the centrepiece of the ensemble. In this case, we went for this gorgeous windowpane panciotto (Italian for vest), also made of cotton and linen, the colour of Tory blue. It’s an eye-catcher, so be careful with the other elements. They key is not to overdo it.

We also added a silver necktie (silk and linen), with blue houndstooth patterns (but if they ask you, just say “pie-de-poule”, the French term: it sounds better). Given the quasi-classic cut of the collar, we went for a traditional, four-in-hand knot.

The straw hat has changed into a Fedora, but with a “fake” light blue crown and a snapped-up brim. Because of its particular brim, you can wear this Fedora even if the shape of your face is narrower than the average.

In my opinion, contrary to the most common perception - there is an age limit when it comes to dressing like a New Dandy. I would say: stop when you are forty/forty-five, depending on your lifestyle and shape. Also, ideally, you wouldn’t want to dress like a New Dandy if you are evidently out of shape because this sort of style calls for bold patterns and fat men always tend to look a bit cartoonish dressed in bold patterns. Finally, don’t think that you need to spend a lot of money in order to dress like a New Dandy. That is not the case, provided you do keep in mind, however, that the cost-per-wear of a New Dandy outfit might be a little higher than normal.

Take a closer look at the Italian menswear brand Paul Taylor over at Andrea Loquenzi Holzer's A Gentleman in Rome.

Roman-born style blogger, image consultant, and personal shopper Andrea Loquenzi Holzer, a.k.a “John Cravatta” (instagram: john_cravatta) blogs at “A Gentleman in Rome” (www.agentrome.com). Former wonder boy of Italian politics and journalism, he left the scene very early on in his career, claiming to be “extremely skeptical” about mainstream media outlets and the political scene itself. Before dedicating himself entirely to the world of style, he has published extensively for several different media outlets in Italy and abroad (such as L’Occidentale, Longitude, and Pj Media) on the subjects of politics, economy and history. He holds a degree in International Development from “La Sapienza” University and a Master Degree in European Studies from the “LUISS Guido Carli” University.