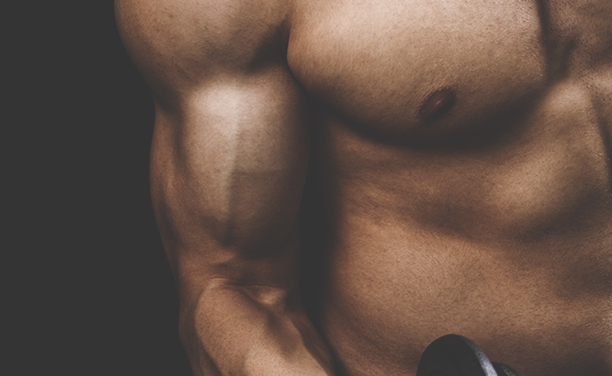 They are the one muscle that almost every man will workout, especially over legs. A “vanity muscle” we could say. It is often the muscle that we first exercise when we pick up a weight for the first time in our lives…you know, the bicep curl, we have all done it! It is, of course, the bicep muscle.

However much most of us workout our biceps they just don’t seem to grow compared to other muscle that gets worked out. They are often lagging behind. However, you see some in the gym with massive biceps and little else to be profoundly impressed by, why? Two things may be down to this, the first; good genetics. We often have a muscle or muscle group that just seems to respond to training compared to others. The fact is genetics will give an advantage, and there if nothing you can do to change this, obviously.

The second; these guys are probably focusing a large proportion of their training targeting this muscle group, leaving somewhat impressive bicep development, but consequently leaving other muscles lagging in development.

Leaving the genetics aside, it is the fact that these guys are targeting the muscle enough to stimulate the muscle fibres, and subsequently induce growth to this region.

First, you need to understand the when we say bicep in the gym we often refer to a group of muscles that are utilised under a bicep curl. The bicep brachii is a two-headed muscle consisting of a long head and a short head. This is what gives you those massive peaks to the arms. This is the muscle we predominately think of when performing curling exercises and try to target to build big arms, however, there are more muscles involved in this movement that are key to building mass in this region.

We also have the brachialis; this lies deeper underneath the bicep and on the outer lateral side of your arm. This muscles will often take a lot of work to visibly see but is responsible developing the width of your arms, giving them thickness. You should not overlook this muscle if you want to build mass in your biceps, as it assists with the same movements. 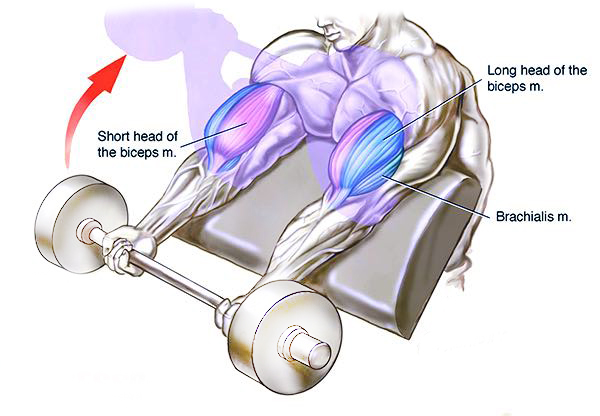 How To Target The Muscles That Support Bicep Development

Form: Supination – To target bicep brachii, which is responsible for the big peaks when flexing, you need a concentrated supination (palms up) grip and movement of the arm. If you focus on leading with your pinky finger as you contract, you should engage more muscle fibres, and acquire a better pump.

The long head is better targeted with the arms down beside you when performing an exercise –  a standing barbell curl is the best example of for this. The standing barbell alone is probably the best exercise to develop the bicep overall, as it singularly works a larger percentage of the bicep muscle, and will recruit more muscle fibres to perform.

The short head of the bicep brachii is better targeted with your arm out in front – like a preacher curl.

Angular Flexion: Positions are – contracted, mid-range, and stretched. This is perhaps the most important aspect to understand. You need to make the lifts through each stage of muscle contraction. The reason behind this is that the tension placed onto the muscle can vary across the muscle, depending on the angle in which the joint is constrained to under movement.

Just as we mentioned about targeting the short head of the bicep brachii with a preacher curl – the position that your muscle is exercised greatly affect how tension is transferred through that muscle. The preacher curl is performed with your bicep under a contracted state, which puts greater tension on the lower portion of your bicep and specifically the short head of the bicep. 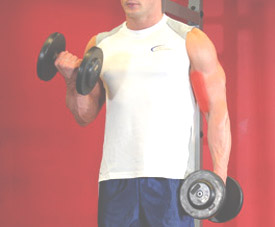 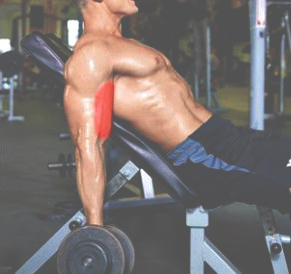 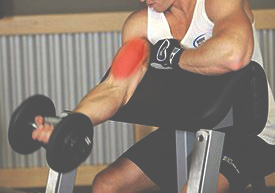 The bicep (highlighted in red) is contracted in this state

Form: Neutral – Your palms should be facing in towards you and to improve the form, focus on leading with the thumb as you contract through the movement. This should be performed under constant tension by not relaxing at the bottom of the concentric movement i.e. your arm should not completely straighten at the elbow.

Angular Flexion: Mid-range is the simplest to perform, however using a bench you can perform an incline hammer curl which would activate more muscle fibres across the brachialis. Again remember that just like the bicep brachii, this too can be performed under different ranges of motion, so make sure you utilise this so you can better target your muscle, activate more muscle fibres, and maximise muscle development. 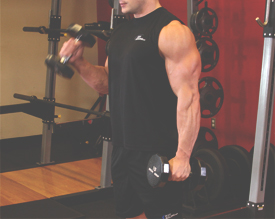 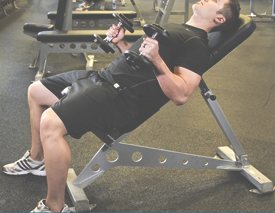