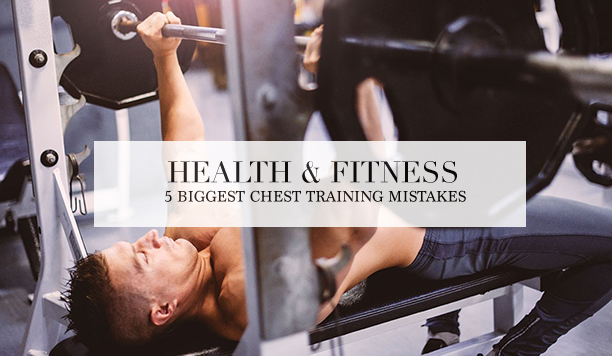 There are some common mistakes that are made when building the chest up. They are repeated far too often and yet correcting them will make a huge impact on your overall mass and strength development.

We have set out the some of the most common chest building mistakes that people make in the gym. They are easy to correct once you know what to look out for. This will hopefully give you the knowledge to build a chest development workout that will maximise your growth potential and attain your goals in mind.

One of the best ways to build a chest is to focus on multijoint movements, such as presses and isolation or single-joint movements. Prime examples of single-joint movement that work the chest region include cable-cross-overs and dumbbell flyes. However, the common mistake that is seen time and again is the poor technique when performing these fly type movements. The elbow joint doesn’t remain steady in a locked position as it should but instead gets recruited to assist in the movement.

If you go too heavy with the weight it is likely that you will break form and start to press and activate the triceps, instead of maintaining tension on the chest. You’ll end up turning a fly movement wrongly into a pressing movement. It’s far better to lighten up the load and focus on the chest when performing a fly movement.

Sticking with a bench rather than cables will give you far better support when performing a pressing movement, you’ll be able to focus purely on chest activation and not have to think about maintaining a strong rigid core. Also, the bench will allow you to apply a much greater force towards the pressing movement due to greater core stability – meaning higher weight loads can be pressed.

If your elbows are bent to some great degree then it is likely that you’ll be pressing the movement somewhat. If you want to perform a fly type exercise, keep to the lower weight loads and allow for a slight bend in the elbow joint that is constantly maintained throughout the movement.

During the lowering (eccentric) phase, allow for your hands to come out wide so that your pecs are stretched. Lower the weight down in a steady and controlled manner, at a slower speed than on the concentric phase. Really allow for your pectorals to stretch out!

Mistake 2: Sticking To Flat Bench First In Your Workouts

It’s important that you build up your chest with a flat bench, it is one of the best chest-building exercises due to it being multijoint and recruits a number of different muscles in the process.

However, over time you will see diminished returns with your chest development as your body gets used to the routine that you put it under. You are going to have to adapt your workouts to keep up the changes to your strength and hypertrophy development.

Start the workout with a different exercise. When you feel that your body isn’t responding the same to the workout routine, change it on its head, mixed it up and start with the exercise that is usually last on your list.

Mistake 3: Going To Faulire When Warming Up

It’s imperative to warm up to prevent injury and to improve the activation of the muscles targeted. This is especially true if you intend to put a fair amount of weight on the bar. However, a warmup set should be just that. You should not be compromising your strength for the actual working set.

If you are training with the intention of increasing strength then it is likely that you will pyramid up the weight. Every time you increase the weight it gets harder, it possible that you may reduce the number of reps slightly as you pyramid up, to accommodate the increase in resistance.

However, if you take it too close to failure or past failure in a warm-up set or even at the beginning of your working set, then you will likely see a lowering in strength output, due to fatigue and lactic acid build up. This will cause a diminished performance and will likely reduce that rate of your strength development in your chest.

Mistake 4: Locking Out On The Incline

This is all too common. When you lockout at your elbows the tension will decrease away from the working muscle and cause the load to displace down through your joints instead. For hypertrophy, your goal should be to maintain the tension throughout the movement – you should be aiming to increase the time-under-tension.

Locking out may also present a second negative effect. Often when people lockout at their elbows, they will hyperextend at the shoulders to straighten up their arms. Again, this will place greater tension on the shoulder joints and reduce the tension load away from the pectorals. 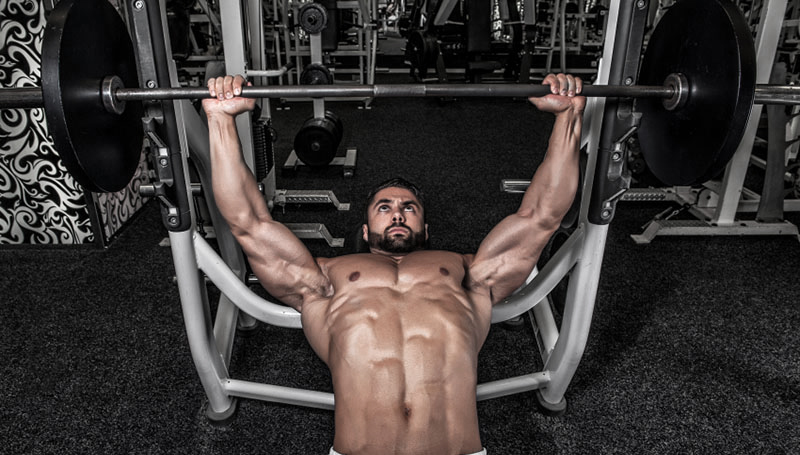 Mistake 5: You Are Not Fully Activating The Pectorals

This is one of the most significant technical aspects that will affect your chest development. You may be pressing through the range of motion, however, the pectorals may not be under complete muscular contraction at any point within that movement. It’s crucial to learn how to maximise the tension onto the chest to fully activate the pectorals.

To increase the activation of the pectorals when performing a pressing exercise – such as a barbell bench press – think as though you are trying to shorten the barbell as you press up on the concentric, and when you come down on the eccentric. Try to imagine as though you are forcing both of your hands closer together whilst they maintain their static position on the bar. What this does is to instantly transfer tension around to the chest region and increase the muscle fibre recruitment as you perform the pressing movement.

Be warned, however, you will likely have to reduce the resistance somewhat, as the pectorals will not have endured the same intensities during a pressing exercise before.