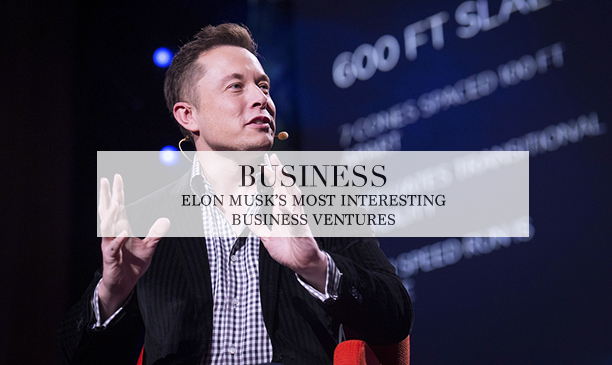 What’s your vision of the future? If there was one man that has a grand vision for the future it has got to be billionaire entrepreneur Elon Musk. He has his sights set on some ambitious endeavours, to say the least. With improving humanity existence anyway he can and making the future seem a little more exciting, Elon could have taken on a number of intereting, challenging projects and business ventures, however, Elon has really pushed the boat out in some cutting edge, risky, and impressive businesses over the last decade. Take a look at the weird and wonderful developments that Elon Musk has made so far, how he’s contributed to the world, and his plans for the future.

Space Exploration Technologies Corporation or SpaceX became Elon Musk’s big project after the success of PayPal and Zip2 before that. With the goal of reducing space transportation cost and the colonization of Mars, it was ambitious, to say the least.

With the first privately funded liquid-propellant rocket to reach orbit in 2008 with the Falcon 1. SpaceX went on to achieve many more great feats such as the first privately funded company to send a spacecraft to the Internation Space Station, the first company to achieve propulsive verticle landing of an orbital rocket with the Falcon 9 in 2015, and the first to reuse and an orbital rocket, the Falcon 9 in 2017.
SpaceX aimed to reduce the cost of space access by a factor of ten. With their current Falcon reusable rocket platform, they can save around $10million per launch by guiding it safely back to the surface, whereas NASA and other companies have allowed their rocket systems to burn up – burning up their cash at the same time.

The Falcon Heavy rocket, which plans to launch in 2017 will be the most powerful operational rocket in the world by a factor of two. It can carry 199,000 pounds “a mass equivalent to a 737 jetliner loaded with passengers, crew, luggage and fuel.” as stated by SpaceX. With a thrust output of 5 million pounds at takeoff its equivalent to eighteen 747 aircraft at full power.

Interplanetary travel and colonization is the ultimate goal of SpaceX, their first mission to Mars was set for 2018, however, that has now been set back until 2020, where they plan to launch an experimental unpiloted lander on a Falcon Heavy rocket and land on the surface of Mars.

With the increase in payload capacity, reduced production cost and reusable rocket systems he aims to one-day make interplanetary travel to Mars attainable to the masses. He estimates that the price could come down to that of an average family home in the US, around $200,000 – this could make colonization on Mars viable.

Transportation of large numbers of people and millions of tonnes of cargo would need to be established to allow self-sustaining and a growing city on Mars. Elon ultimately wants to take 100 people per trip but, hopes to get it up to 200 people on a flight to make the cost cheaper and with that, he could reach a 1 million person colony that’s self-sustainable on 5000 trips. If you include multiple launch vehicles launching at a given time the number of missions would be reduced, speeding up the process.

When Elon Musk began Tesla nobody thought it would succeed, they would be proven very wrong. Electric cars never seem cool or sexy when Tesla was founded, Musk needed to prove to the world that this doesn’t have to be the case. Instead of starting with a middle of the market mass production car it made sense both in terms of their marketing and production strategy to start with a high-performance car. This would allow Tesla to show the full capability of electric. It would also give them the critical and technical knowledge of the production line, how to refine the process and allow them to scale up at a manageable pace.

Problems set in and within a few month costs went up and money was almost gone. Musk had two choices, let it fold and walk away or take the rest of his earning from his sale of PayPal to keep his dream going, knowing very well that he may lose every dollar he had made. For Musk there was only ever one choice, Tesla had to work it had to be a success. He took the last bit of cash from his $180 million he made from the sale of his previous business, PayPal, to keep Tesla going – it paid off!

Their first production car the Roadster was a success, it showed the world that electric can perform next to the conventional combustible engine.

Three more production cars have since been produced for the mass market with a lower price tag. When the latest in the range the Model 3 was announced it took almost $10bn (£7bn) worth of pre-orders in just two days. The Model 3 is Telsa first attempt at an “affordable” electric car starting from $35,0000 with an Enhanced Autopilot system priced at $5,0000. This would allow the Model 3 to stay in its lane automatically, match the speed of the car in front, change lanes when you indicate and park itself. It also the capability to be fully autonomous self-driving with a higher spec.

Preempting the increase in lithium-ion battery usage throughout the world and for the need to reduce the cost of production of these batteries, Musk has gone onto building a Gigafactory. When finished it will become the biggest factory in the world by footprint with over 10 million square feet of floor space.
Telsa cars will exceed the entire global production of batteries in short order. The factory will be entirely energy self-reliant powered by a combination of on-site solar, geothermal and wind sources.

The Gigafatory 1 will reduce the production for their electric vehicle battery and Powerwall packs by 30% and allow Tesla to produce 1,500,000 cars per year. If that wasn’t impressive enough, he has at least five more Gigafactories planned for development around the world.

Solar panel technology integrated well with Elon’s other ventures. With the production cost of solar panels being relatively high it made it difficult to sell large volumes to a mass market. Elon’s goal with SolarCity was to get the production cost down and make the technology more efficient. His vision was for localised, home solar panels that could allow a regular household to become energy independent, reducing the cost of their energy bills and even allowing for a household to sell excess energy back to the grid. All of this, whilst becoming more eco-friendly at the same time.

Their Solar Roof which is glass solar tiles cost a little bit more than a regular tiled house. At $21.85 (£16.50) per square foot, it is somewhere around 60% more than a regular tiled house but, when you factor in the value of energy collected, there is a net gain – “it pays for itself by reducing or eliminating a home electricity bill” says Telsa. The aesthetics of the tiles are surprising – they look great.

Musk embarked on a fourth mode of transportation – the Hyperloop One.
Superconductor magnets are intended to levitate pods on a cushion of air and also allow for electrical currents to propel the pods forward through a tube system. The pods will run inside near vacuum state tube system as this will minimise drag and will allow the pods to reach a proposed supersonic speeds of over 700mph. A journey from London to Edinburgh or LA to San Fransico would take just 30 minutes.

Whoever reaches a breakthrough in developing artificial intelligence will ‘rule the world’ say Russian President Vladimir Putin. Elon recognizes the power that AI will have over humanity in the near future and if that power is ever concentrated to a few then they will have the potential to oppress their citizens. Elon has embarked on developing artificial general intelligence in a way that is safe and beneficial to humanity.
By making AI available to everyone, he aims to counteract corporations, governments and militaries ability to use super intelligence systems to gain too much power.

As AI technology expands, humans will begin to fall behind in their ability to process information from a digital interface. Remarkably in the last decade or so we have dropped somewhat in the amount of information (in bits) that we can input into a digital interface, moving away from desktop/laptop keyboard and more towards mobile devices which for most people only involve two thumbs to key in data rather than eight fingers and two thumbs from the former.

Humans will be superseded by AI in their superior ability to perform practically all task faster, more effectively and with greater efficiency. Neuralink is a neurotechnology company with the aim to help integrate the human brain with artificial intelligence.

Neuralink technologies will involve brain implants that will interface directly with the brain. The enhancements could improve memory and allow for a more direct interfacing with computing devices.

The cheekily named the Boring Company was founded in late 2016 when Elon was stuck in traffic on a commute from his LA home to his SpaceX office and mentioning his novel solution on his Twitter account. His vision here is to develop a vast network of underground tunnels that could be multi-layered and would transport cars and other vehicles through them around cities like LA. Congestion on the streets above would then reduce or disappear, which is becoming a major concern in developed and developing nations with the increase in personal transportation vehicles.

The company said: “At the Boring Company, we plan to build low-cost, fast-to-dig tunnels that will house new high-speed transportation systems. Most will be standard pressurised tunnels with electric skates going 125+ mph.”

Speaking at a TED conference he ventured that this tunnelling project takes around 2% of his time and has become a personal hobby.

They are in a race, however, with Gary their pet snail. Musk said “Gary is capable of currently going 14 times faster than a tunnel boring machine. We want to beat Gary. He’s not a patient little fellow, that will be victory. Victory will be beating the snail.” 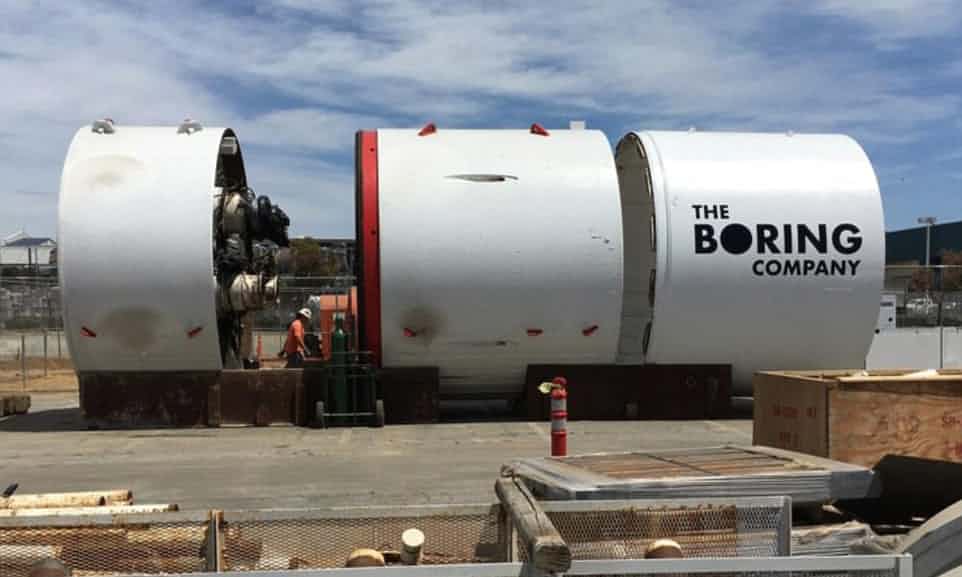 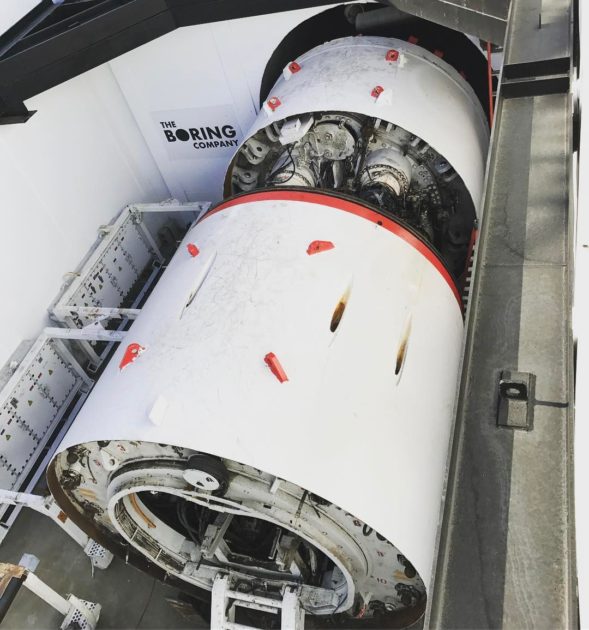 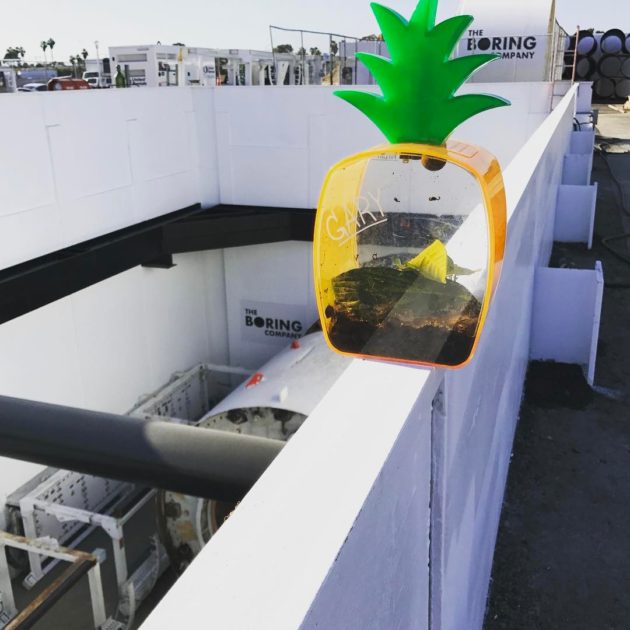 Gary the snail lives in a pinnapple