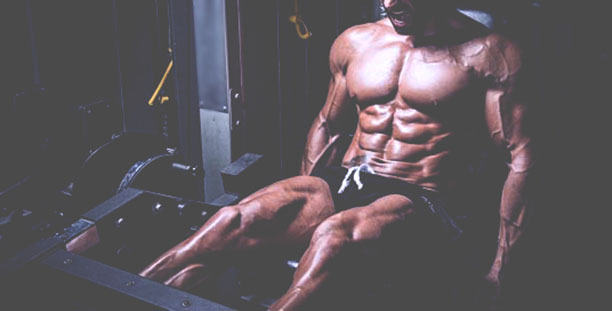 Having good form is key to long-term muscle development. However, many people fail to identify their poor execution of movements when performing an exercise. This is not only the case for beginners but, for experienced performers too.

A gym instructor’s basic instructions to beginners during inductions is to focus on good form to promote safe movement, and the basic compound movements and exercises needed to target a muscle region on the body. This is absolutely fine and needed for beginners, however, there is a much deeper level of understanding in terms of exercise form and muscle isolation movements, that could be added to the initial teaching. Despite, whether or not you have a good gym instructor to teach you more than the basic movements during an induction, all and I mean all experienced individual need to understand the concepts that we propose.

Understanding muscle mechanics can greatly affect the speed and quality of your muscle development. To make your exercises as efficient and as effective as possible you must first understand exactly where the exercise is targeting and how to maximise the full recruitment and force output of the muscle when performing the exercise.

Second, from that exercise, you must determine whether there is any part of that muscle or muscle group, that did not undergo a substantial force application during that exercise (hint: there usually always is). We are going to show you how to recruit these underworked muscle regions by adapting the movement of the exercises.

Here’s What You Need To Know… 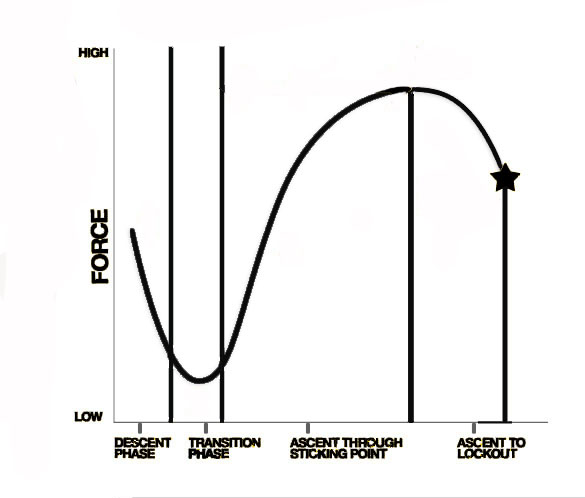 You need to understand is how to manipulate force angles to work the entire length of the muscle. Basic science will help to understand what could help further advance your muscle development. As you perform an exercise there is a centre of force applied to the working muscle, however, as you move your muscle that centre of force can shift. This means that the tension is removed from that target area, and as you may know maintaining tension onto the target muscle has an important role in muscle hypertrophy training. Identifying the tension displacement throughout a movement can greatly help to work all parts of the strength curve, which could bring about more effective workouts.

Perform a standing shoulder dumbbell fly (dumbbell lateral raise) and identify during the movement the point at where there is the greatest tension focused on the deltoid… You should find the greatest tension is at a 90-degree angle parallel to the floor. This is the highest point in the strength curve, above and below this 90-degree angle, then the force applied to the target muscle (deltoid) supersedes. 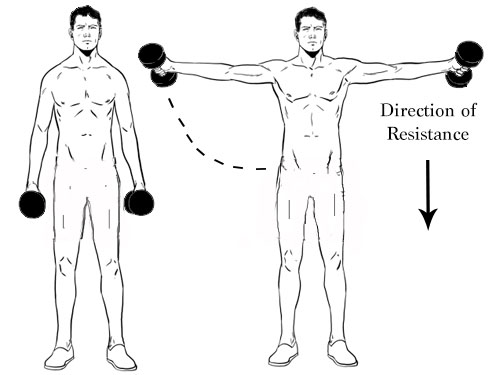 Standing-dumbbell-lateral-raise: tension focused on the mid-top range of motion

The deltoid, just like every muscle should be worked through its whole range of motion. In this case with shoulder flys, only the middle portion of the deltoid is getting substantial stimulation, the lower portion especially isn’t. You might ask when is the lower portion of the deltoid muscle activated in a standard shoulder fly? It’s activated or most recruited during the initial movement, from the point when your arms are by your side and about to move out and up. The problem…there is hardly any force applied at this point on the muscle fibers, as the center of force is focused down towards the ground (due to gravity) and not towards the target muscle. This means this part of the muscle doesn’t get the same exposure to a high resistance, due to the lack of tension it receives at this angle.

How To Manipulate The Force Angle On The Shoulder Fly

Manipulating the force angle just takes some thought on the planes that your joints move in and the direction that the force needs to be applied to create resistance upon the target area. In this case, adapt the exercise so that the tension is at its peak on the lower portion of the deltoid. If you are using free weights then you would have to lie on the floor, on your side (lying one-arm lateral raise). While holding one dumbbell perform a shoulder fly again. 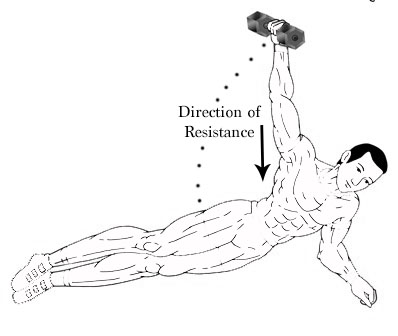 You will now find that the hardest point to move the weight up is the initial phase – from static beside your hip, from the moment you raise your arm. The weight-load or tension will then displace away past a 45-degree angle, and when the dumbbell and your arm is pointing straight up towards the ceiling, that tension has shifted away from your deltoid – causing them to relax. Note: the force is transferred down through your joints when your arm is fully extended above you, causing only a slight engagement of the muscles in your arm to stabilise the weight.

This exercise can be performed with greater ease using cable flys. By simply changing your position of where you stand you will alter the point of where the tension is greater focused. Hint: to find the position to where the force is at its peak, find the 90-degree angle between your arm and the cable your holding. 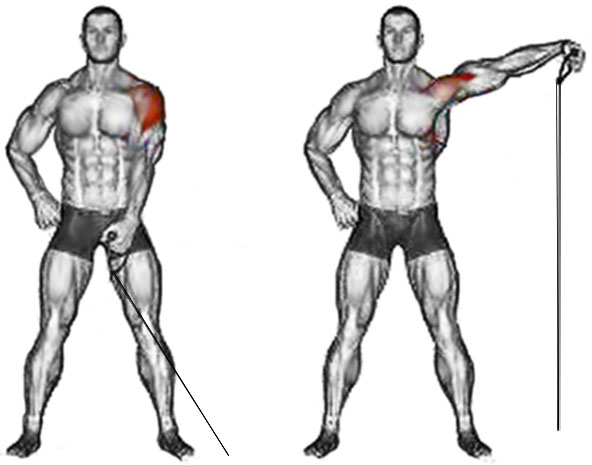 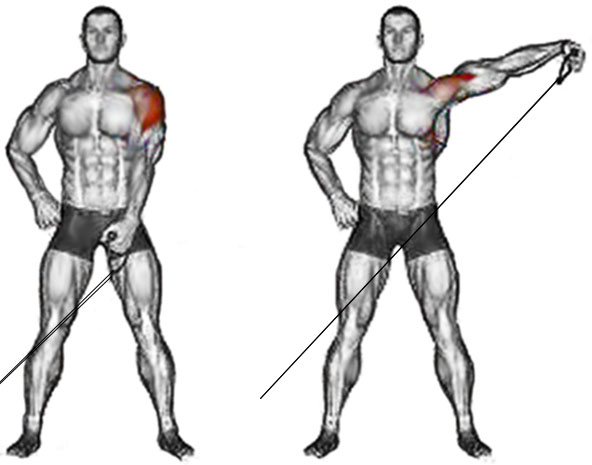 The leg extension is an isolation exercise with its primary goal to stimulate the quadriceps from usually a seated fixed position. The quadriceps are a large muscle group that together have a high strength capacity compared to many other muscles in the body. Compound movements such as a standard squat is considered the single most beneficial leg exercise for hypertrophy training. However, you need to acknowledge how the squat takes effect upon the strength curve.

The squat is the superior leg exercise overall, as it works a larger percentage of the quad muscles with a much more even spread in terms of tension and force distribution across the muscle grouping. Particularly, the tension is focused on the mid-range part of the motion, this is the point at where they work best as they form more connections due to an optimal overlap of muscle filaments. At the extremes of the motion (hyper-flexed/hyperextended) the filaments are overcrowded or too far apart.

The squat also stimulates the stabilising muscles associated with the quadriceps more holistically than any other leg exercise – another point as to why it beats most leg exercises. But, its drawbacks are the primary examples why isolation exercises should routinely be added to your exercise regime. primarily, the squat fails to isolate a specific region on the quad muscle group to allow you to achieve the maximum strength development and growth from the muscles.

Consider that isolation exercise should be used not only to aid in the increase of the weight lifted by the muscle but, to also focus the tension onto a specific region of the muscle.

How To Manipulate The Strength Curve of The Leg Extension

The position that you sit on the leg extension machine greatly affect strength curve. First, consider the relation of your knees to the pivot point on the machine. Adjusting the seat position so that you sit further back on the bench with your knees behind the pivot will increase the stress that the movement has on the muscles at the initial phase of the movement – where the legs are bent and quads relaxed. This, however, will place less stress onto the later phase of the movement – where the legs are more extended and quads more contracted, pushing to lockout.

Contrarily, moving the seat forward and sitting with your knees past the pivot will have the alternate effect upon the quads, with the initial movement under less stress and greater stress placed on the later phases of the movement.

Manipulating the strength curve is a tool that should be considered for the advanced performers who have a built up a good foundation of knowledge and strength, with an existing regime focused primarily on well-executed compound movements.

Finally, on a safety note, you must take precautions when manipulating the force angles as your muscle strength will be at its weakest at the extreme ranges. This means you must consider less resistance than you would in the mid-range of the movement, to prevent muscle strain or injury.