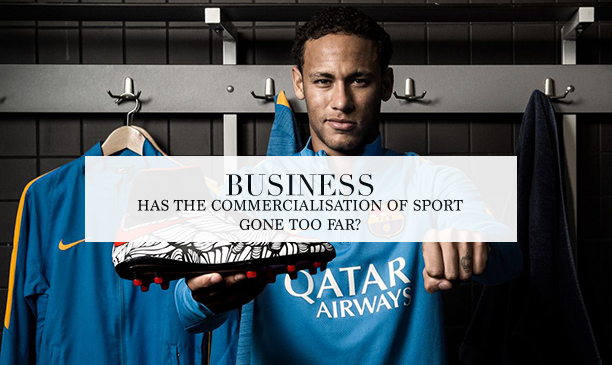 The global sports market is estimated by Statista to be worth around $91billion. An incredible sum of money that with the advancement of technology and the continuous expansion of the global sports market, creating an influx of businesses wanting to be associated with sports. Due to this, the sports sponsorship market becomes more saturated by the day, with businesses and sporting entities trying to create new opportunities to generate revenue.

Here in lays the potential problem, with more businesses attempting to get in on the action, the saturation of the market increases the potential risk of over-commercialisation and the essence of sport being lost, with more focus being towards increasing profitability, rather than focusing on the integrity of sports or the satisfaction of customers. This is evident in the recent emergence within Football shirt sponsorships, with sponsor advertising space on the sleeves now being created; something which was unheard of until recently, especially within the Premier League.

Sponsorships deals range across a multitude of sporting entities, from mega deals with infrastructure like Arsenal Football Club’s Emirates stadium, to deals with athletes such as football superstar Cristiano Ronaldo or basketball star Lebron James, to teams like the New York Red Bulls; each sponsorship deal is worth millions. These deals are agreed to allow both parties to benefit, with the sponsored entity gaining financial or ‘in kind’ incentives, and the sponsor aiming to achieve market share growth, increased brand value or awareness and potential revenue from consumers purchasing their products because of the association with an entity.

Five potential opportunities for brands to gain from sponsorship:

But now, sport can be overrun with commercial aspects, at every turn there is an advert for consumers to see, there is no escaping them. This can have a negative effect for both consumers and the sponsor, as consumers could become irritated by the constant marketing, or the message being communicated by the sponsor through their marketing, could be mixed up in the ‘noise’ of other sponsor’s communications.

As a business needs revenue to survive, sponsors are becoming more focused on the financial aspects of sponsorship, running the risk of losing customer focus and within sport, the customer is vital. Not only are they customers, but they become fans (considerably more loyal than your average customer). Therefore, if you lose their interest, there is no revenue to be made.

These potential dangers are very corporate based, with sponsors and sports organisations focusing on their profitability and seemingly less on their consumer’s interests. That isn’t to say that the consumers have been completely forgotten about, just that sport is a global industry, heavily reliant on profitability which can aim to benefit the future of a sport.

Luke is a Masters Degree Graduate in Sports Marketing from Coventry University, with a passion and interest in all things marketing; from sports to digital marketing. Honing in on his business acumen, the content he creates is in touch with current business trends. Follow Luke on LinkedIn.